After 6 years of running the Welfare Food Challenge, we decided to write a cookbook for 2018. What should have been the 7th year of challenging the public to understand how hard it is to eat on welfare for 7 days (let alone how hard it is to live, day in day out, 365 days of the year) 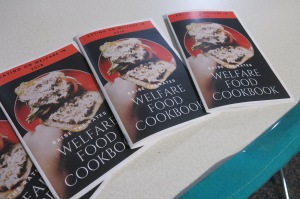 The cookbook is empty.

It is nearly impossible to live on welfare in 2018.

Because the $100 increase to rates has brought about an approximately $130 increase in rents to Single Room Occupancy hotels (SRO hotels) in Vancouver’s Downtown Eastside, which is what we base our calculations off of this year.

This year, in 2018, one year after we saw the first dismal increase to income assistance rates in over a decade, there is a mere $23 left for the entire month.

We cannot ask people to attempt a “challenge” on $5.75 for the week.

What this means is that our government currently has a choice. They can choose to either entrench poverty, through maintaining rates at this level, or providing only incremental increases, or to end poverty, through bringing back vacancy control to tie rent to the unit and by significantly raising the rates so that the depth of poverty no longer drowns people.

You can read Jean Swanson’s reflections on this here.

And you can help us to push for change by getting in touch with us at raise.the.rates17@gmail.com.

Write to Shane Simpson, Minister of Social Development and Poverty Entrenchment–err, Reduction, to let him know that you support a significant increase to raise welfare rates: SDPR.Minister@gov.bc.ca

And write to Selina Robinson, Minister of Housing and Municipal Affairs, to encourage her to amend the Residential Tenancy Act to include vacancy control: MAH.Minister@gov.bc.ca

Make sure to reach out to your local MLA and let them know that you support Raise the Rates and you want to see real action to end poverty!

Now is the time to make the choice: end poverty, or entrench it?

View all posts by raisetherates